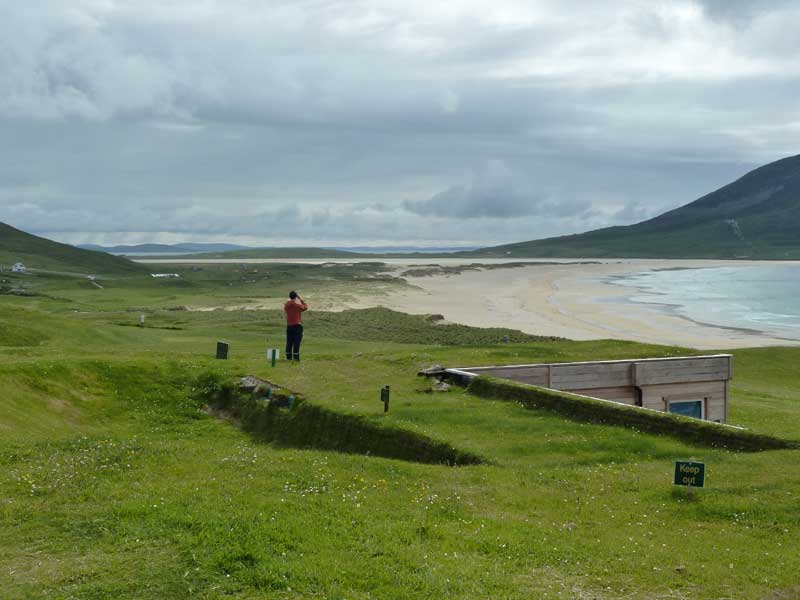 With a background of spectacular mountains and the thunder of Atlantic breakers Harris Golf Course occupies a wonderful situation on a beautiful island.

A demanding layout has been compared to Augusta National and the Old Course at St. Andrews.

A links terrain this is the most northerly course on the west coast of Scotland and has been played by the great and good.

Ronan Rafferty played the course during the 90’s and his ball is now the trophy for an annual competition while the £5 green fee paid by Nick Faldo is the centrepiece for the “Faldo Fiver” competition.

The committee clearly has a good eye for a marketing opportunity.

It goes without saying that the golf here is hugely enjoyable, the rough is fierce and there are many opportunities for spotting seals, otters, buzzards and eagles among a wealth of wildlife.

located at Scarista on the West side of South Harris on the way south to Northton overlooking Scarita Beach.

Harris golf course is described as one of the most picturesque 9-hole courses in the world, the Isle of Harris golf club was first set up in 1930 and through hard work and dedication it is now considered to be a first class links course.

For more details go to www.harrisgolf.com